“Will the humour be understood?”, European companies with offices in Asia have asked us, as they expressed concern whether the ‘ Humour against hacking awareness campaign ‘ would be suitable for an Asian audience.

So we asked a competent Asian woman based in Manila in the Philippines, Pam Skouhus, to review our animated video films, including the new GDPR film about the EU personal data regulation. Her reply was:

“Yes, they all go down well. The humour is being understood.”

Ms Pam Skouhus – photographed in her office on the image above – is HR Director in the company 1902 Software Development. In the review, she wrote:

“The humor in the video clips that I watched are quite easy to follow and understand. First of all, the subject matter at hand has a universal context, and the target viewers for these videos hypothetically possess some form of knowledge about data, security, breach, cybercrime, and related issues. And so, one does not have to be a westerner to appreciate the humor in the video animations. I personally found the videos light and humorous in its treatment of a really serious subject matter, which is absolutely universal.”

In conclusion, Ms Skouhus summed up:

“Here are my insights about it from a point of view of a Filipino:

The animation and graphics are light and fun. Perfect to soften a serious subject matter at hand.
The flow / speed is fast-paced. It does not drag and will most likely be watched until the end.
The choice of text is minimal, limited to what’s important, and supportive of the audio. Just the right amount words, not text heavy. (If more text were added, I wouldn’t enjoy it as much.)
The audio is clear, direct-to-the point, but does not sound cold.
Overall: You can absolutely use this type of video for Asian audience; Asians will watch this.”

Humour against hacking awareness campaign in Asia will work fine

On a question whether it would be better if the animated characters had an Asian appearance, Ms Skouhus replied: “I wouldn’t change a thing in the way the cartoon characters look.”

Soon we will be able to report more about how well the Humour against hacking awareness campaign is doing in Asia. 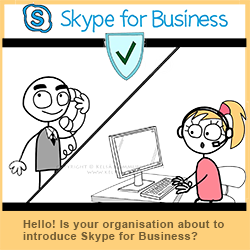